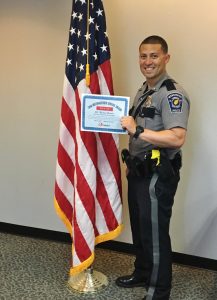 The Manchester Township Police Department is proud to announce that Ptl. Michael Guarino was one of the officers recognized amongst his colleagues throughout the State for his commitment to DWI enforcement.  The ceremony took place at Rutgers University with approximately 500 law enforcement officers in attendance.

Ptl. Guarino, who is a five year veteran of the Manchester Police Department, led agency in DWI arrests for 2016 with a total of 9 DWI arrests.  Additionally, Ptl. Guarino is a certified Drug Recognition Expert (DRE) and completed 29 DRE evaluations in 2016.  Ptl. Guarino also participated in several high visibility DWI enforcement campaigns throughout the year including DWI grant operations and DWI checkpoints.

As a certified Drug Recognition Expert, Ptl. Guarino received extensive academic and practical training in the evaluation of drivers who are suspected of driving while under the influence of drugs.  This is more commonly known as “drugged-driving.”  Ptl. Guarino is also part of the Ocean County DRE program where he is often called out to assist other agencies within the County to evaluate drivers suspected of “drugged driving.”

Keeping the roadways of Manchester safe from drunk and drugged drivers is nothing new to Ptl. Guarino.  In 2014, he received the Kimberly-Ames DWI Certificate of Recognition for his unwavering commitment to keeping not only the residents of Manchester safe, but also those who pass though it by rigorously enforcing DWI laws.