On Monday, May 4, 2015, at 4:51 p.m., Manchester Township Police Officers were dispatched to the area of 2 Fox Street in the Pine Ridge section of Whiting for a reported brush fire. Dispatch received several calls that there were flames visible from within the wooded area. 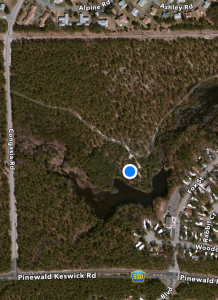 Officer Kyle Rickvalsky arrived at the scene and observed flames in a wooded area near the Pine Ridge sales office. Firefighters from the Whiting Fire Company and the New Jersey State Forest Services were able to extinguish the flames quickly. The fire damaged approximately three acres along the lake across from the sales office. 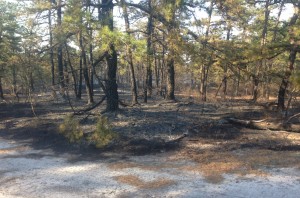 According to investigators, the source of the fire was an unknown type of open flame. There was no reported damage to any residences or property. No one in the Pine Ridge area evacuation and no injuries were reported during this incident. The original call came in from the New Jersey State Forest Fire Service, after a spotter from one of their fire towers noticed the blaze and immediately contacted authorities.