On Sunday, May 3, 2015, at approximately 5:48 p.m., a 2003 Grey Dodge Ram pickup being operated by Francesco Galderese, 19, of Tinton Falls was struck by a 2010 Toyota Yaris, operated by David B. Mcleod, 66, of Manchester. The crash occurred at the intersection of Lake Road and Monroe Avenue in the Whiting section of the Township. 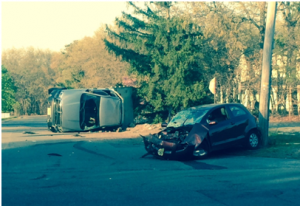 Mr. Galderese was travelling eastbound on Monroe Avenue and apparently failed to observe the stop sign at the intersection with Lake Road. As the Dodge entered the intersection, Mr. Mcleod’s Toyota, which was travelling southbound on Lake Road, struck the driver’s side of the Dodge causing it to roll multiple times before coming to rest on its driver’s side. The Toyota then struck a utility pole.

The impact to the utility pole severed a power line and caused several transformers in the area to catch fire, igniting several small brush fires. These fires were quickly extinguished by members of the Whiting Volunteer Fire Department.

The crash is under investigation by Ptl. Michael Anderson. Assisting at the scene were Whiting Volunteer Fire Department, Quality Medical Transport, and JCP&L.