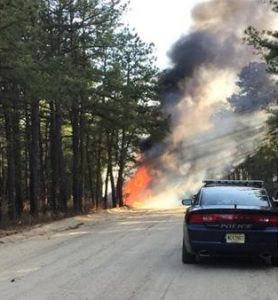 On Tuesday evening, April 11, 2017, at approximately 6:05 p.m., members of the Manchester Township Police Department responded to Nature Way in the area of Harry Wright Lake in the Whiting section of the Township, to investigate a vehicle fire. Upon arrival, officers observed a 2013 BMW 328 slightly off the roadway against a tree fully engulfed in flames. The fire was quickly extinguished by firefighters from the Whiting Volunteer Fire Company and the New Jersey State Forest Fire Services who had arrived on scene to assist. 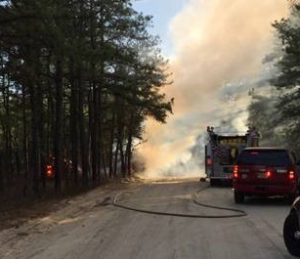 The initial investigation revealed that the BMW, which was being operated by a 17-year-old Whiting female, was traveling south on Roosevelt City Road, when it made a left turn onto Nature Drive, left the roadway and struck a tree.  The vehicle then began to smoke and subsequently caught fire. The juvenile operator was able to safely exit the vehicle and did not sustain any injuries during the crash or subsequent fire.

Also assisting at the scene were EMT’s from Quality Medical Transport. The crash is being investigated by Patrolman Collins of the Manchester Township Police Patrol Bureau. 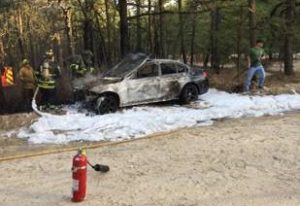