On Saturday, October 28, 2017, at approximately 6:33 p.m., officers from the Manchester Township Police Department responded to the area of Lacey Road and Lake Road in the Whiting section of the Township to investigate a motor vehicle crash involving a vehicle which had left the roadway and struck a tree. 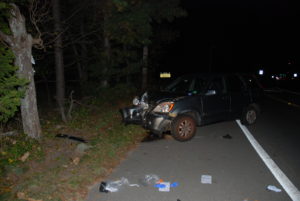 Upon arrival, officers observed a gray, 2005, Honda CRV off of the roadway along a wooded area of Lacey Road. The vehicle, which had extensive front-end damage, had impacted a tree. The initial investigation revealed that the Honda was traveling west on Lacey Road when it suddenly veered off of the right-hand portion of the roadway and collided with a tree. The driver, and lone occupant of the vehicle, was identified as 49-year-old, Lori Dubielak of Whiting. Dubielak was wearing her seatbelt and her airbag had deployed, but was unresponsive to first responders. Dubielak was removed from the vehicle and was transported by ambulance to Community Medical Center where she succumbed to her injuries.

Assisting at the scene were members of the Whiting Volunteer Fire Company, EMTs from Quality Medical Transport and paramedics from MONOC. Also assisting were detectives from the Ocean County Sheriff’s Office, Crime Scene Investigations Unit and the Ocean County Prosecutor’s Office. This crash is being investigated by Patrolman Ian Bole of the department’s Traffic Safety Unit.