On Sunday, March 18, 2018, at approximately 3:37 p.m., officers from the Manchester Township Police Department responded to the area of 82 Lacey Road in the Whiting section of the Township for the report of an overturned vehicle. 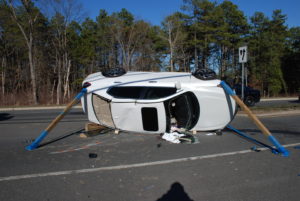 Upon arrival, officers located a 2017 Honda Accord on its passenger’s side with an elderly female trapped inside. The female driver, identified as 82-year-old Whiting resident, Lois J. Spaw, was semi-conscious and was pinned between the passenger’s side seats and the roof. Ms. Spaw was extricated from the vehicle by members of the Whiting Volunteer Fire Department and subsequently transported by ambulance to Jersey Shore University Medical Center in Neptune for treatment of her injuries. 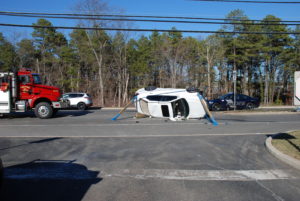 The investigation revealed that Ms. Spaw was driving eastbound on Lacey Road when she left the travel lane of the roadway. After doing so, she crossed the shoulder of the roadway and struck a concrete curb in front of 82 Lacey Road. Still continuing east, Ms. Spaw struck the curbing at the entrance to the Whiting Volunteer First Aid building prior to impacting a utility pole guy wire. Ms. Spaw’s vehicle traveled up the guy wire and impacted the utility pole approximately ten feet off the ground. The vehicle then went airborne and traveled approximately 30 feet back into the eastbound travel lane of Lacey Road where it overturned and rolled onto its passenger side. Ms. Spaw, who was determined to have not been wearing her seatbelt at the time of the crash, is currently listed in stable condition.

The roadway was closed in both directions briefly while the investigation was being conducted. Assisting at the scene were members of the Whiting Volunteer Fire Department and Fire Police, EMTs from Quality Medical Transport and paramedics from MONOC. The cause for this crash is being investigated by Sergeant Antonio Ellis of the department’s Traffic Safety Unit.