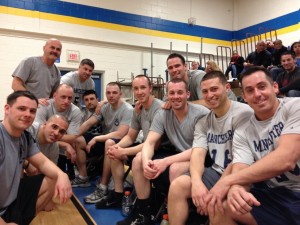 Manchester PBA 246 is pleased to announce that $2,500 was raised for a local high school scholarship during its fifth annual benefit basketball game versus school district staff on Friday, March 7.

The donations will benefit the Rodney Copeland Athletic Scholarship Fund, founded in memory of the Manchester Township High School coach who died in 2009 at age 44. Officer Chris Cerullo, who serves as the department’s School Resource Officer at MTHS, spearheaded the event this year for PBA 246.

“It was a great night for our community and I can’t thank everyone enough,” Cerullo said.

Copeland, a lifelong Manchester resident, worked for the Monmouth County Sheriff’s Department in addition to coaching at MTHS. PBA 246 is proud to work with the school district to raise funds for Manchester students and thanks all who participated in the event.

“The PBA always likes to give back to the community, and this is one of the ways we can do that. It was a fun, competitive game,” said PBA 246 President Paul Bachovchin.