The Manchester Township Police Department is pleased to welcome its newest Patrolmen, Gavin Reilly and Victoria Raub, who were sworn in by Mayor Kenneth T. Palmer during a ceremony in the Municipal Complex Civic Center on May 1, 2017, in front of family and police personnel. 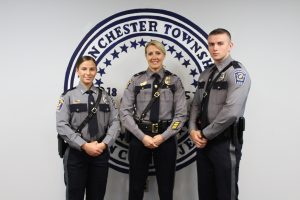 Taking his oath first was Gavin Reilly, who excelled in his role as a Class II Special Officer with the Manchester Township Police Department since November of 2016. Ptl. Reilly, a 22 year old Toms River resident, made the Dean’s List each semester at Ocean County College while working on his Associate’s Degree, and completed the Ocean County Police Academy Special Class II Training, 36th Class. He is currently working toward his Bachelor’s Degree at Kean University. 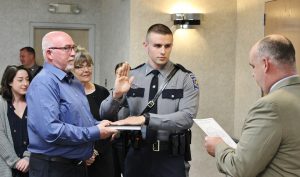 Victoria Raub, a 26 year old who previously served as an Officer in the Townships of Long Beach and Evesham, was sworn in next. A Barnegat Township resident, Ptl. Raub excelled in athletics and academics throughout her schooling. She was a member of the Phi Theta Cappa Honor Society at Ocean County College, and later transferred to Stockton University where she completed her Bachelor’s Degree in Criminal Justice in 2012. Ptl. Raub graduated from the Ocean County Police Academy, 39th Class II Special Officer training class in 2016. 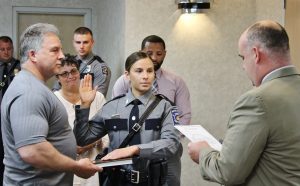 The hiring process began in January of 2016, when more than 230 applicants participated in the Physical Agility Examination held at Manchester Township High School. This test consisted of pull-ups, push-ups, sit-ups, squat thrusts, and a 1 mile run. Those applicants who achieved a passing score advanced to the boxing component of the testing process. Approximately half of the applicants completed all phases of the physical exam successfully and advanced to the written examination phase. From there, the top scorers went before the Oral Board for extensive interviews. The top candidates underwent a thorough background investigation and passed medical, psychological, and drug screenings.

“We strive to select the absolute best Officers, upstanding individuals who have proven that they are capable of proudly serving our Department and the community. The public can rest assured that only a select few exemplary candidates successfully complete our intensive hiring process,” said Chief Parker.

Ptl. Raub now will begin the Manchester Township Police Department’s intensive twelve week Field Training and Evaluation Program; this program was previously completed by Ptl. Reilly as a Special Officer. During this training, Ptl. Raub will be instructed and mentored by several highly trained and seasoned officers. We wish them both success in their law enforcement careers serving Manchester Township and its residents. 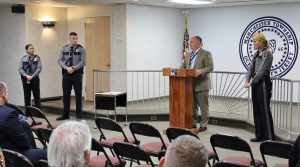 “We are able to welcome these Patrolmen to our Police Department because of the continued support of Mayor Palmer and the Township Council. They help to make all of this possible, and I say this with sincerity and appreciation of their commitment to providing us with the tools we need to keep our residents safe,” said Chief Parker.