On Tuesday afternoon, April 18, 2017, at approximately 4:44 p.m., members of the Manchester Township Police Department responded to the area of County Route 539 near the entrance to Cousins Paintball Park, to investigate a motor vehicle crash involving an overturned vehicle. 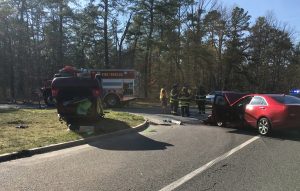 Upon arrival, officers observed a 2007 Ford Focus overturned lying on its roof off the roadway and a 2014 Cadillac ATS on the side of the road with significant front end damage. The investigation revealed that the Ford was traveling north on Route 539 and was attempting to make a left turn into the entrance of Cousin’s Paintball Park when it was struck by the Cadillac, which was traveling south on Route 539. 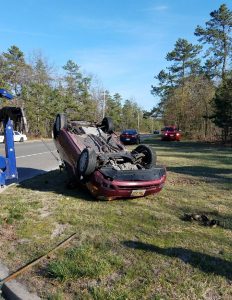 Responding and assisting at the scene were members of the Whiting Volunteer Fire Company, and EMT’s from Quality Medical Transport.  The crash is being investigated by Patrolman Brian Collins of the Manchester Township Police Department’s Patrol Bureau.