The Manchester Township Police Department is pleased to welcome two new patrol officers to the force. Jesse Tate and Jordan Weed were sworn in as full-time officers by Mayor Kenneth T. Palmer during a ceremony in the Municipal Complex Civic Center on June 5, 2018, in front of family, police personnel and Township administrators. The officers were hired in response to recent retirements. 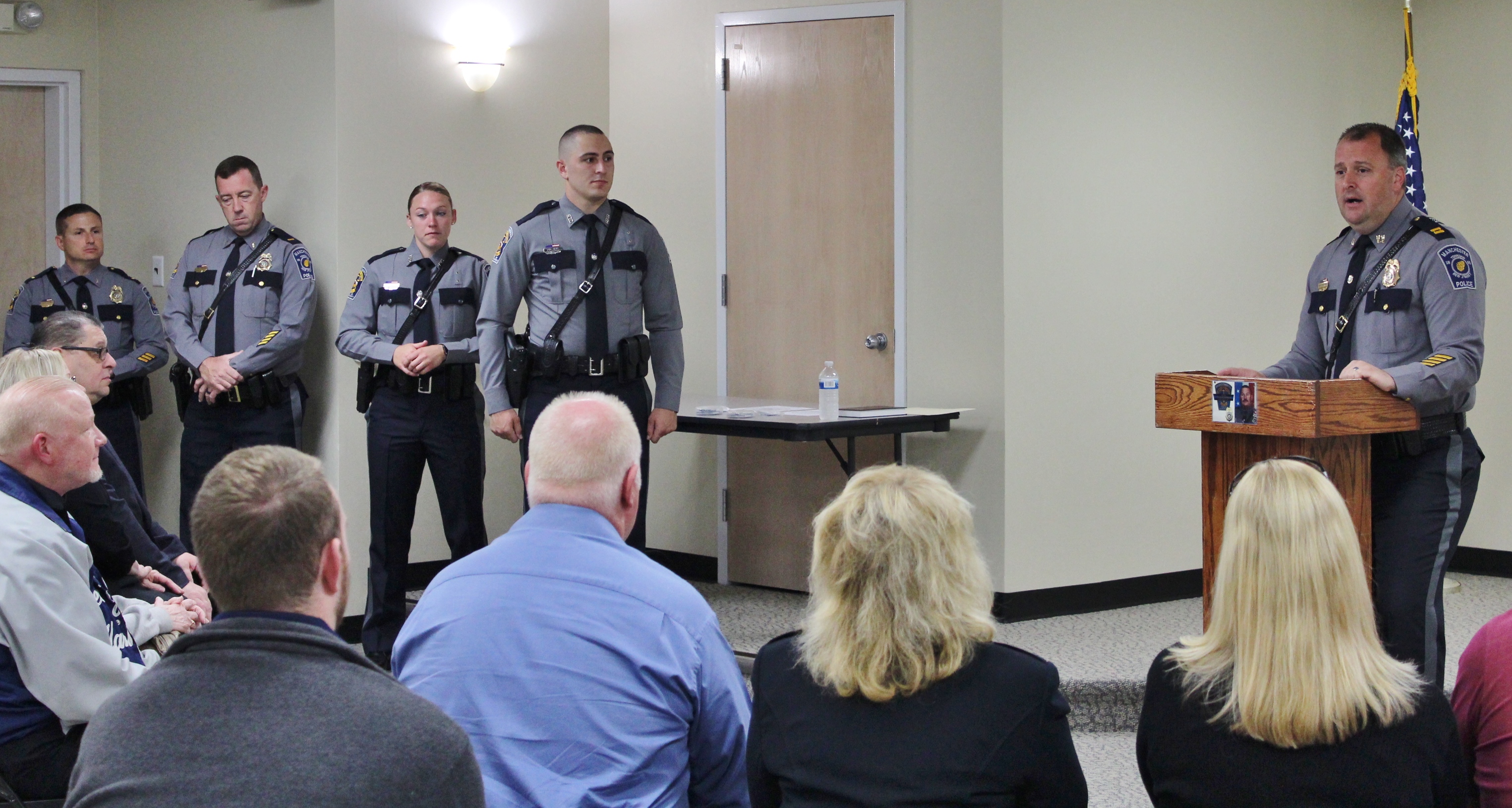 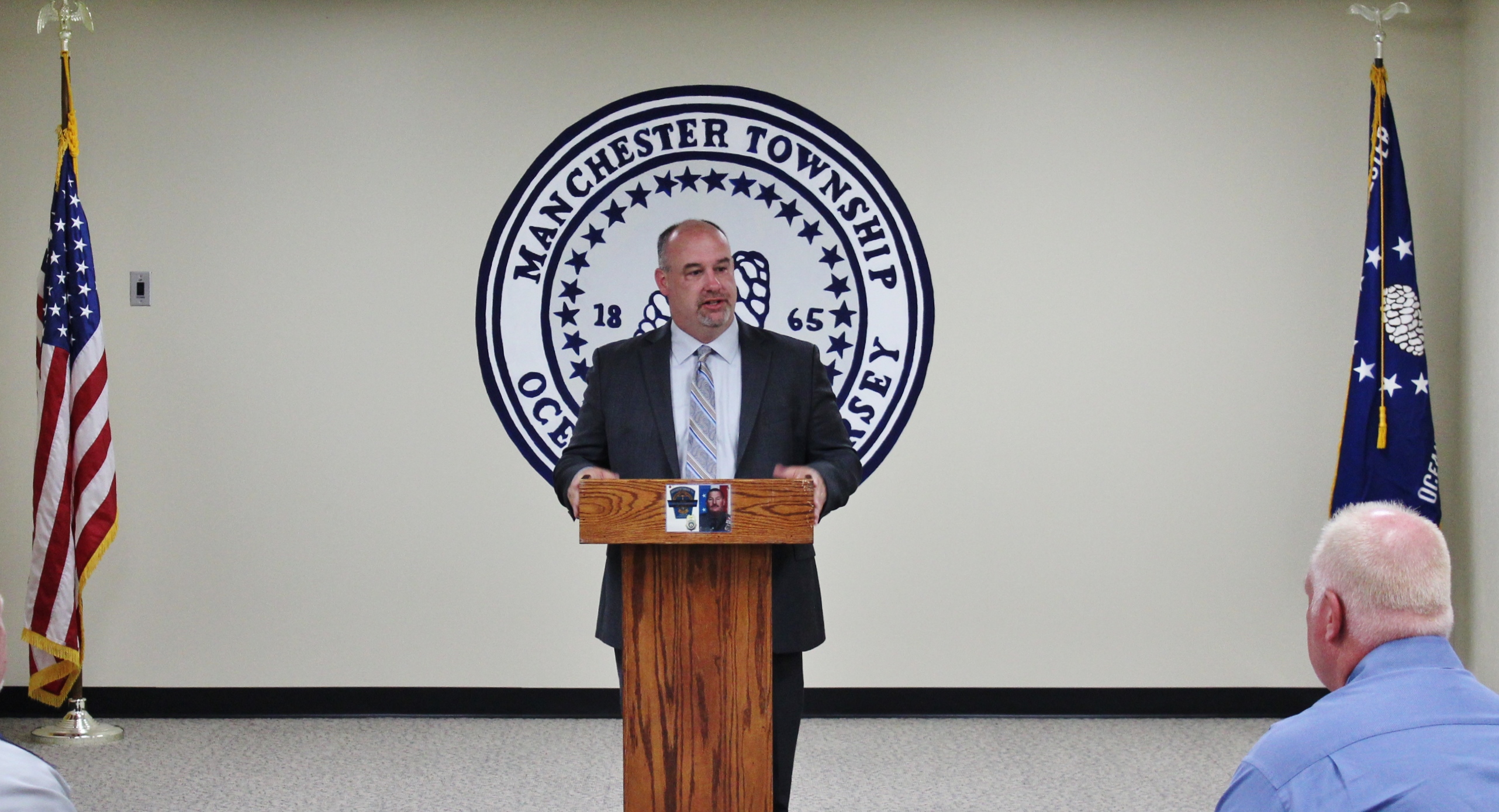 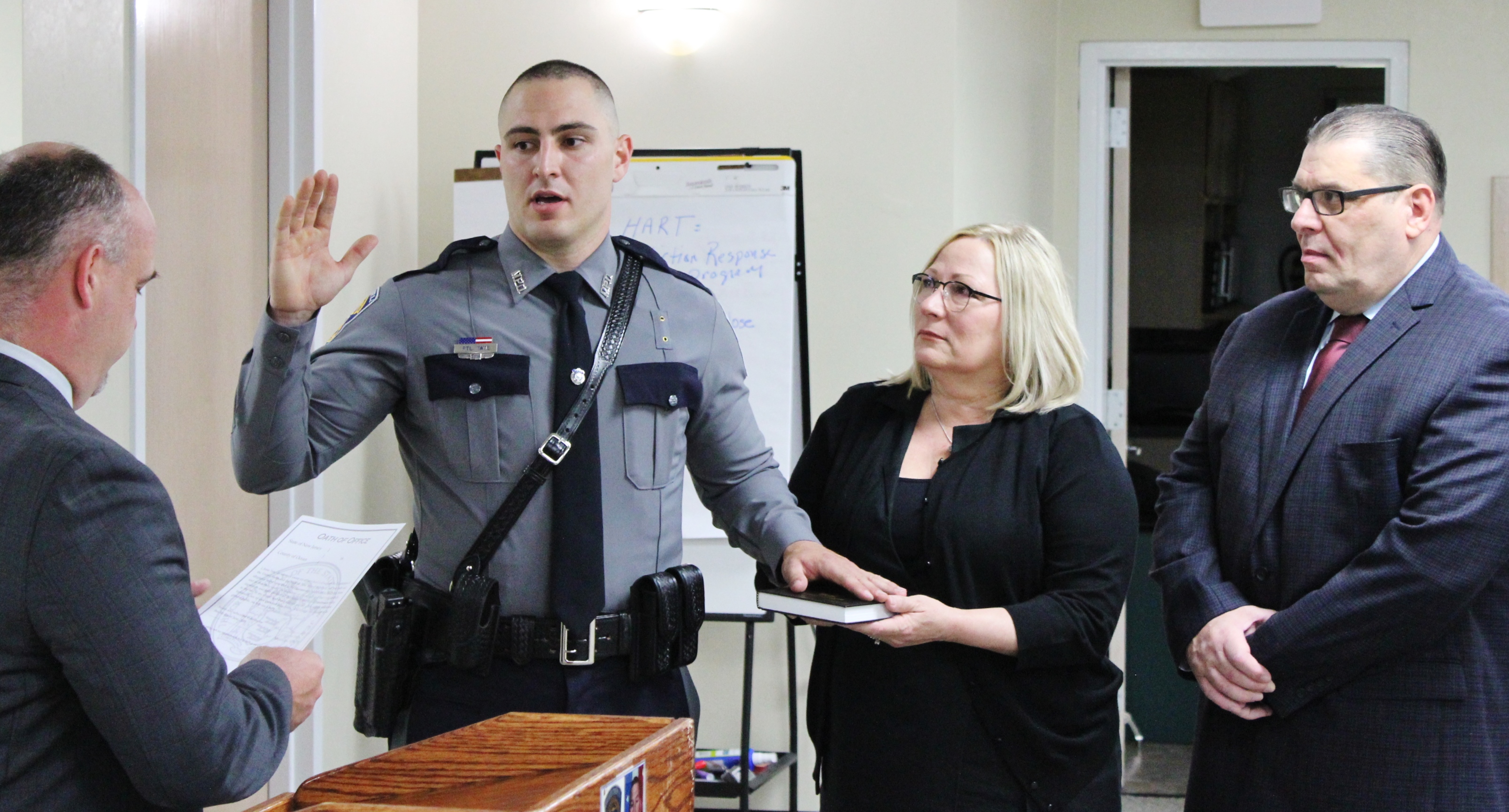 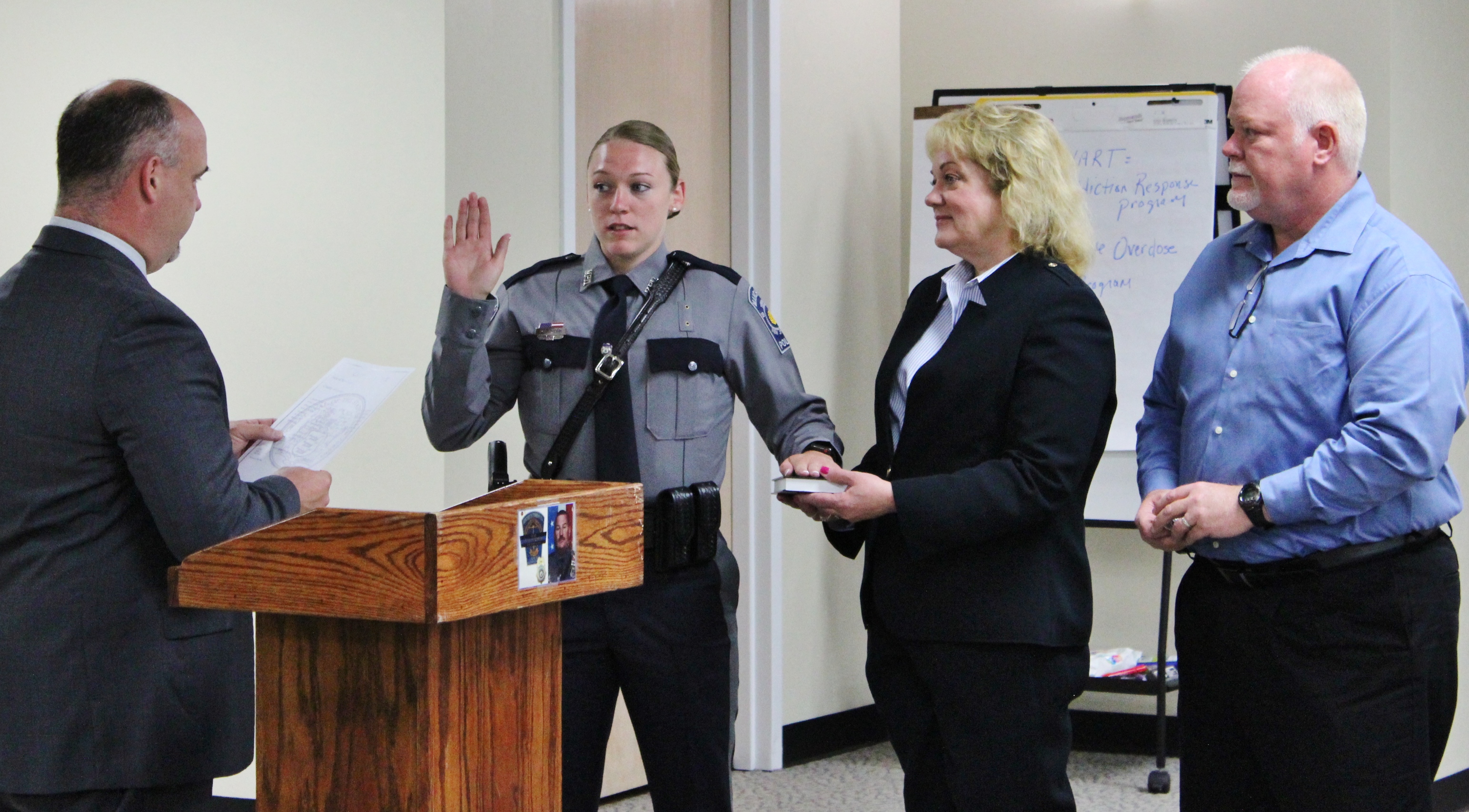 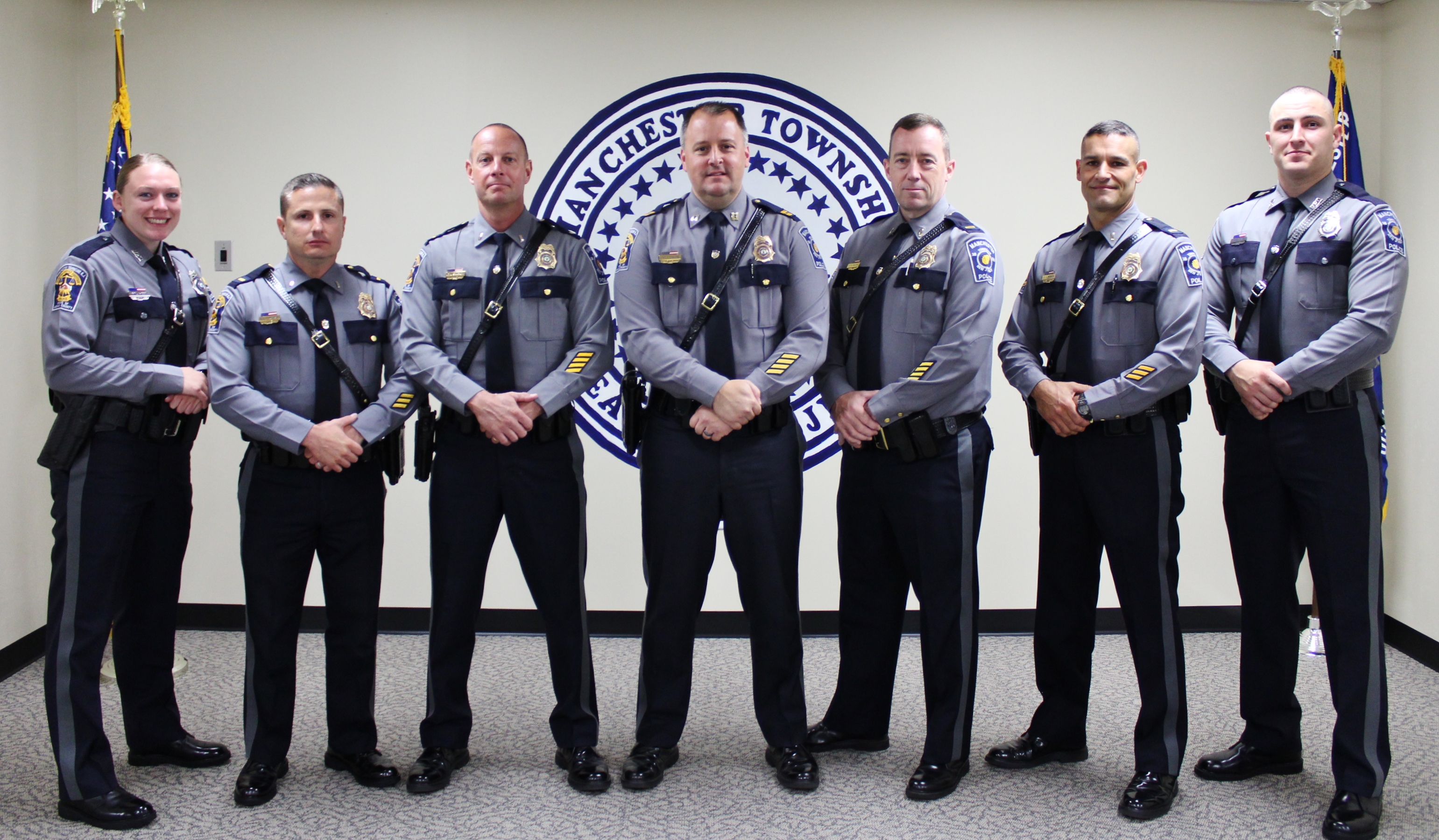 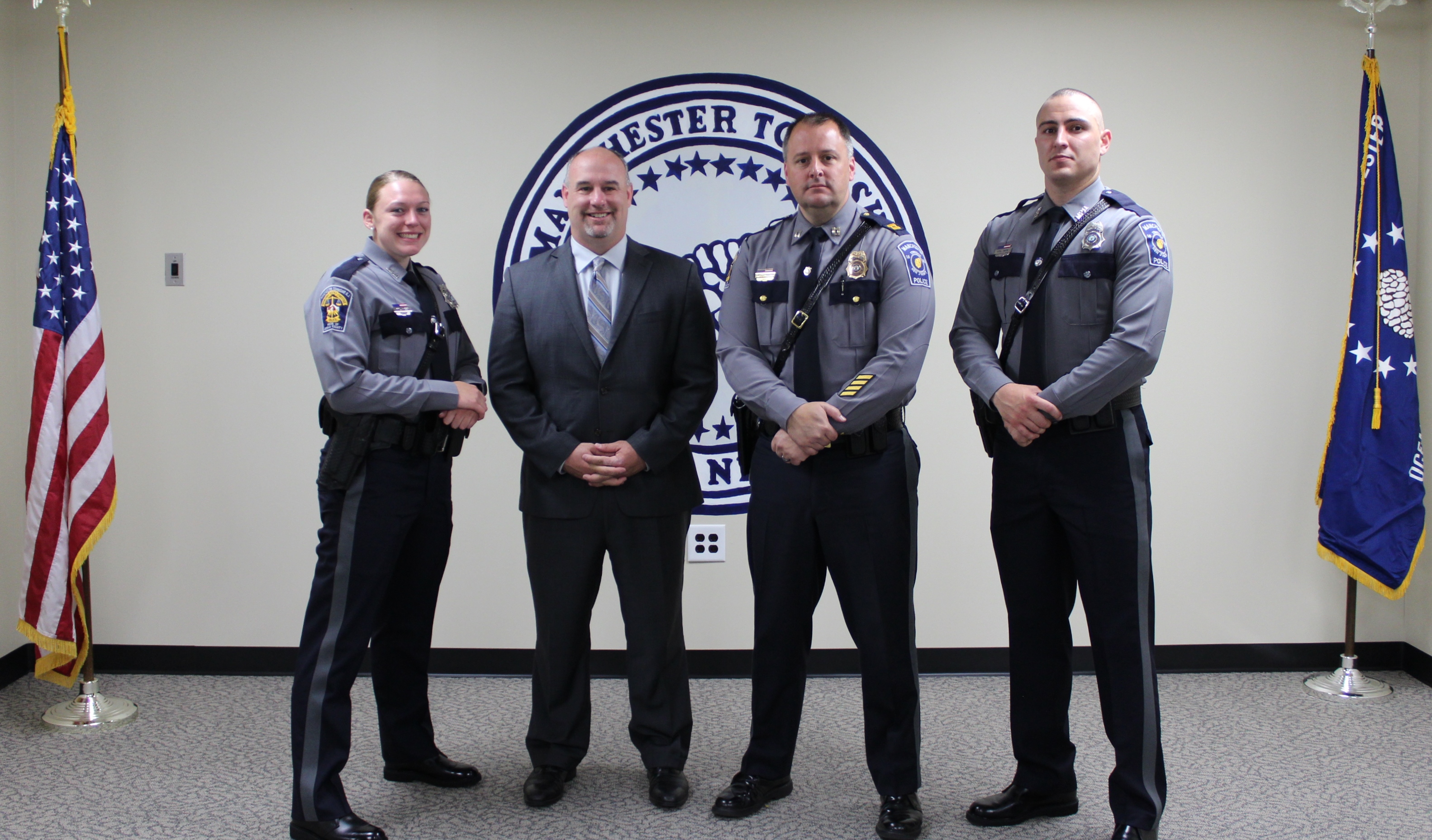 [Show thumbnails]
Taking his oath first was Jesse Tate, a 24 year old Toms River resident who received full athletic scholarships for football to Elon University, where he earned a bachelor’s degree in Communications, and the University of New Haven, where he pursued a master’s degree in National Security. Ptl. Tate completed Ocean County Police Academy Special Class II Training, 43rd Class, on May 17, 2018, and previously worked for the Seaside Heights Police Department. During the police academy, Tate achieved a physical fitness ranking of 3 out of 52 recruits, scoring 450 out of 500 possible points.

Jordan Weed, a 23 year old Toms River resident, attended Boston College on a full athletic scholarship for softball and graduated with a bachelor’s degree in Psychology. She previously interned for the Boston College Police Department, and is currently pursuing a master’s degree in Criminal Justice from the University of New Haven. Ptl. Weed graduated from the Monmouth County Police Academy as the top ranked female recruit on May 23, 2018.

The swearing in ceremony was facilitated by Capt. Todd Malland, who explained that the intensive Manchester Township Police Department hiring process began in January of 2018, when approximately 170 individuals submitted their applications for employment. In phase one, applicants participated in the Physical Agility Examination held at the Manchester Township High School. The grueling test consisted of pull-ups, push-ups, sit-ups, squat thrusts, and a 1 mile run, with no recovery time allotted between events. Those applicants who achieved a passing score advanced to the pass/fail boxing component. The 92 applicants who completed all portions of the physical exam were invited to participate in the Written Examination phase. From there, the top scorers went before the Oral Board for extensive interviews. Then, the top candidates underwent a thorough background investigation and submitted to medical, psychological, and drug screenings.

“Our hiring process is rigorous and demanding, and only those individuals who meet the highest standards are considered for employment with the Manchester Township Police Department,” said Chief Lisa Parker. “Our residents should be proud knowing that Ptl. Tate and Ptl. Weed, two upstanding and driven individuals, will represent and serve our Department and community.”

Following the ceremony, Ptl. Tate and Ptl. Weed entered day one of the Manchester Township Police Department’s intensive twelve week Field Training and Evaluation Program. During the training program, they will be instructed and mentored by several highly trained and seasoned officers. We wish them both success in their law enforcement careers serving the residents of Manchester Township.