on Friday, October 19, 2018 at approximately 7:57 a.m., officers of the Manchester Police Department responded to the intersection of County Route 571 (Ridgeway Road) and Beacon Street for a report of a two car collision involving an overturned vehicle.

Upon arrival, officers observed two vehicles in the roadway. One of the vehic 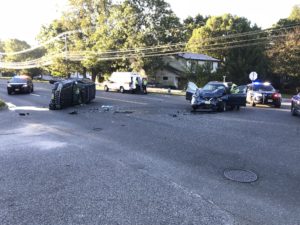 The investigation revealed that the Jeep was being operated by 19 year old Alex Luft, of Manchester NJ. He was operating his vehicle east bound on Beacon Street and had stopped at a posted stop sign prior to the crash. The driver of the Jeep entered the intersection of County Route 571, intending to turn left when his vehicle was struck by a Nissan, which was being operated by 32 year old Danielle Rosiejka, of Jackson, NJ. Ms. Rosiejka had been traveling south on County Route 571 in the left lane at the time of the crash. The impact caused the Jeep to first roll onto the passenger side and then onto the driver side where it came to rest facing east. The crash caused the Jeep’s driver side airbag to deploy.  The driver of the Jeep, Mr. Luft, was determined to have not been wearing his seatbelt at the time of the crash. He suffered head and neck pain and was transported to Community Medical Center in Toms River. The Nissan deployed multiple air bags in the collision and sustained heavy front end damage. The driver of the Nissan, Ms. Rosiejka, was wearing her seatbelt and suffered a complaint of head and chest pain. She was also transported by ground ambulance to Community Medical Center. The roadway was temporarily closed during the investigation.

Assisting at the scene were Paramedics from MONOC and Quality Medical Transport. The crash is under investigation by Patrolman Jesse Tate of the Manchester Police Patrol Bureau.