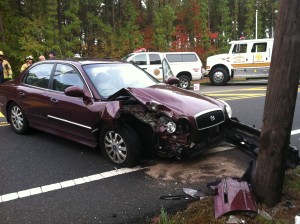 On 10/20/12 at 8:43 am, 911 was alerted that a car had crashed into a pole and the driver was hurt. The location given was at the intersection of Rte 547 and Ridge Rd. Manchester officers, Manchester First Aid, Manchester and Ridgeway Fire companies all responded. When officers arrived at that intersection they found nothing. The original 911 caller had hung up and couldn’t be contacted to establish where the crash actually was. After spending several minutes searching the surrounding area, the location of the crash was found near Ridgeway Blvd and Aberdeen Ln.

When police arrived on scene they found that the driver, Sharon Kurack of Aberdeen Ln, Manchester, 61, was the sole occupant of the 2005 Hyundai Sonata. Although her injuries did not appear to be life threatening, they were severe enough for a medi-vac helicopter to be called to transport her to a trauma center. Manchester First Aid and Mon-Oc Paramedics stabilized Kurack until the medi-vac helicopter MonOc1 transported her to Jersey Shore Medical Center.

Kurack’s vehicle impacted a JCP&L pole and caused one of the primary wires to become dislodged. JCP&L was contacted and emergency crews responded to repair the damage. Ridgeway Blvd was shut down from Rte 547 to Rte 571 while the damage was being repaired.

This crash is being investigated by Ptl Scott Thompson of the Patrol Division.