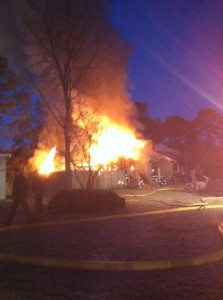 At approximately 0619 hours, Firefighters responded to a report of a structure fire at 1016 Lawrence Avenue, where the first units to arrive,  reported that the residence, a single-story wood framed home, was fully engulfed in flames. The family who was home at the time of the fire safely escaped, however the family dog did not make it out.

According to emergency response personnel, it appeared that the fire may have started in the rear of the residence, however, the cause and origin of the fire remains under investigation by Harry Roon and John Pasola of the Ocean County Sherriff’s Department, Office of the Fire Marshal.