On Monday, April 30, 2018, at approximately 11:24 am, officers from the Manchester Township Police Department responded to the intersection of Commonwealth and Northampton Boulevards in the Pine Lake Park section of the Township to investigate a serious motor vehicle accident. 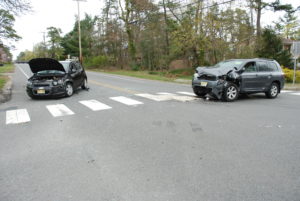 Upon arrival, officers located a blue, 2007, Hyundai Azera on the front lawn of a Commonwealth Boulevard residence with extensive driver’s side damage. The vehicle’s airbags had deployed and the driver was trapped inside of the vehicle. Additionally, officers observed a gray, 2010, Toyota Highlander and a black, 2013, Chevrolet Sonic disabled in the intersection, both with front end damage.

The driver of the Hyundai, 79-year-old, Joan Reed of Manchester, was extricated from her vehicle after which she was airlifted by medevac helicopter to Jersey Shore University Medical Center for treatment of serious injuries. The driver of the Toyota, a 17-year-old female from Manchester, was transported to Community Medical Center for the treatment and evaluation of non-life threatening injuries as was the driver of the Chevrolet, 61-year-old, Debra Volpe of Toms River. The roadway was partially closed for several hours while emergency workers investigated the crash and cleared the scene. 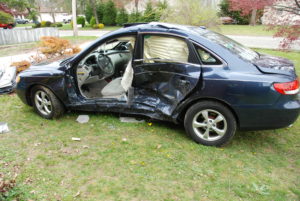 Assisting at the scene were members of the Manchester and Ridgeway Volunteer Fire Companies as well as EMTS from both Quality Medical Transport and the Manchester Volunteer First Aid Squad. The crash is being investigated by Ptl. Ian Bole of the department’s Traffic Safety Unit.