Tri-Axle Dump Truck Collides and Overturns onto a Vehicle, Sending Three Occupants to a Local Hospital

Tri-Axle Dump Truck Collides and Overturns onto a Vehicle, Sending Three Occupants to a Local Hospital

On Monday, May 15, 2017, at approximately 3:28 p.m. , members of the Manchester Township Police Department responded to the intersection of Route 539 and Harry Wright Boulevard in the Whiting section of the Township to investigate a motor vehicle crash involving an overturned dump truck. 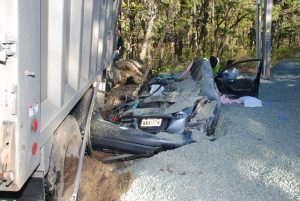 Upon arrival, officers observed a gray, 2008, Nissan Altima pinned under a silver, 2016, Kenworth T80 tri-axle dump truck which had been loaded with stone. Both vehicles were along the northbound shoulder of Route 539. The initial investigation revealed that the dump truck was traveling southbound on Route 539 when it struck the driver’s side of the Nissan as it was making a left turn onto Harry Wright Boulevard from Route 539 south. The impact caused both vehicles to leave the roadway and the subsequent collision with multiple signs and trees caused the dump truck to overturn onto the Nissan’s roof and spill its load. 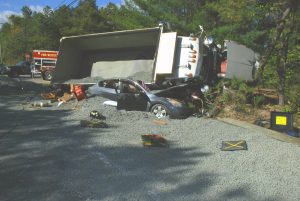 The driver of the Nissan, 24-year-old, Andrea Penna of Whiting was trapped underneath stone and debris as the vehicle’s roof completely collapsed on top of her. Extensive extrication efforts were conducted and Penna was eventually rescued from her vehicle and transported to Community Medical Center for treatment of non-life threatening injuries. The driver of the dump truck, 41-year-old, Tayfun Obut of Browns Mills and the front seat passenger of the Nissan, 22-year-old, Kaitlyn McCabe of Lakehurst both sustained non-life threatening injuries and were transported to Community Medical Center for evaluation and treatment. The roadway was closed for several hours during the rescue, investigation and subsequent clean-up.

Assisting at the scene were detectives from the Ocean County Prosecutor’s Office and Ocean County Sheriff’s Office Crime Scene Investigations (CSI) Unit as well as members of both the Manchester and Whiting Volunteer Fire Departments. Also assisting were EMTs from Quality Medical Transport and paramedics from MON-OC as well as representatives from the Manchester Township Department of Public Works and the Ocean County Road Department.  We would also wish to express our gratitude to the members of the New Jersey State Police, New Jersey Department of Corrections, and other motorists who had stopped to assist with the extrication process.  This crash is being investigated by Patrolman Ian Bole, Sergeant Antonio Ellis, and Patrolman Thomas O’Hare with the Manchester Township Police Traffic Safety Unit.