On September 15, 2017, at approximately 8:27 p.m., the Manchester Township Police Department responded to a report of a structure fire at 1 Ignatius Drive in the Renaissance development. Upon the arrival of Patrol Officers, it was reported that the structure was fully involved, as they observed flames protruding from the roof. 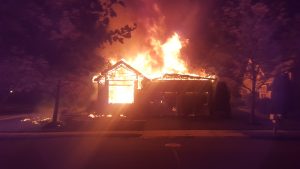 EMT’s from Quality Medical Transport and Manchester First Aid responded to the scene where they treated two firemen for minor injuries.  One fireman was transported to Community Medical Center in Toms River for additional treatment and evaluation.