A two car crash at the intersection of Routes 571 and 70 in the eastern section of the township sends six people to two area hospitals and leads to the arrest of a Robbinsville man on the suspicion of Driving While Intoxicated. 26-year-old, John Paulino of Robbinsville was travelling eastbound on Route 571, when he struck the front passenger’s side of a Chevy Malibu being operated by 80-year-old, Helen Giagiari of Manchester. At the time of the collision, Giagiari was attempted to turn left from Route 571 onto Route 70 westbound. Paulino’s front seat passenger as well as Giagiari and all four of her passengers were transported to area hospitals. 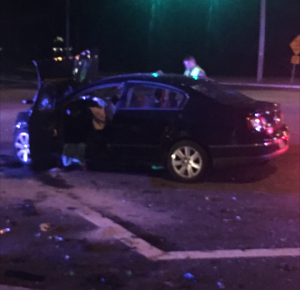 On Saturday evening, June 24, 2017, at approximately 7:33 p.m., officers from the Manchester Township Police Department responded to the area of Route 571 and Route 70 for the report of a two car motor vehicle accident with multiple injuries. Upon arrival, officers located the two involved vehicles in the roadway with heavy front end and side damage.

The preliminary investigation revealed that Paulino was travelling eastbound on Route 571 in his 2006 Volkswagen Passat when he impacted the front passenger’s side of Giagiari’s 2005 Chevy Malibu as she was turning left from Route 571 onto Route 70 westbound. While investigating the crash, Paulino was arrested on the suspicion of DWI at the scene. 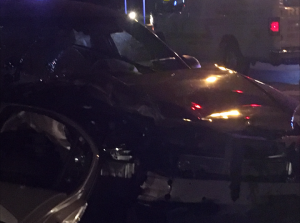 The force of the impact resulted in multiple passengers being transported to area hospitals. Paulino’s front-seat passenger, Brenda Noriega-Pinzon, of Hamilton along with Giagiari’s passengers, Anna Troise and Rose Coppolino of Manchester were transported to Jersey Shore University Medical Center, in Neptune with serious injuries. Giagiari and her other passengers, Liberina Salzone and Janette Mohr, also of Manchester were transported to Community Medical Center for moderate injuries. The roadway was closed for several hours while officers conducted the investigation and the scene was cleaned up.

Assisting at the scene were investigators from the Ocean County Sheriff’s Office and the Ocean County Prosecutor’s Office, as well as fire fighters from both the Ridgeway and Manchester Volunteer Fire Departments. Also assisting were paramedics from MONOC and EMTs from Quality Medical Transport. The crash is currently under investigation by Patrolman Tom O’Hare of the Manchester Township Police Department Traffic Safety Unit.