Vehicle Collides with Pedestrian Victim Transported to Hospital for Injuries

Vehicle Collides with Pedestrian Victim Transported to Hospital for Injuries

On Friday, October 27, 2017, at approximately 12:51 p.m., officers from the Manchester Township Police Department responded to the parking lot of Charlie’s Pizza, located at 1980 Route 37 in the Savannah Acres section of the Township, to investigate a motor vehicle accident involving a struck pedestrian.

Upon arrival, officers observed a red, 1997 Mercury Grand Marquis parked over the curb and onto the sidewalk in front of the restaurant with a heavily damaged bicycle pinned against its front bumper. The investigation revealed that the Mercury was traveling east through the parking lot of Charlie’s Pizza when it turned into a parking space in front of the restaurant. The driver of the Mercury then lost control of the vehicle and drove up and over the curb and onto the sidewalk before colliding with a pedestrian who was pushing her bicycle. The pedestrian was briefly pinned against the building by her bicycle and the vehicle until the driver was able to back her vehicle up and free her. 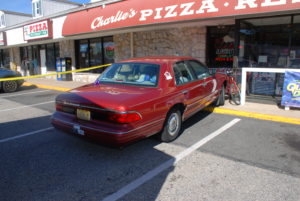 Assisting at the scene were members of the Manchester First Aid Squad, Manchester Volunteer Fire Department, and MONOC Paramedics.  This crash is being investigated by Patrolman Ian Bole of the department’s Traffic Safety Unit.