On Sunday, October 22, 2017, at approximately 2:02 p.m., officers from the Manchester Township Police Department responded to the intersection of Route 70 and Manchester Boulevard, in the Whiting section of the Township, to investigate a motor vehicle crash involving two vehicles.

Upon arrival, officers observed two vehicles, a Kia Forte and a Lincoln Navigator, in the roadway, both with extensive front-end damage. While investigating the collision, officers determined that the Kia was traveling westbound on Route 70 and was attempting to turn left onto Manchester Boulevard when it collided with the Lincoln which was traveling eastbound through the intersection. The force of the impact caused significant front-end damage to both vehicles and injured both drivers. The driver of the Kia, 31-year-old, Kimberly Krysiak of Toms River, was transported by ambulance to Community Medical Center in Toms River for treatment of non-life threatening injures. She was wearing her seatbelt at the time of the crash. The driver of the Lincoln, 65-year-old, Marty Carfora of Whiting, was transported to Jersey Shore University Medical Center in Neptune for treatment of a head injury. He was not wearing his seatbelt at the time of the crash. He is currently listed in stable condition. 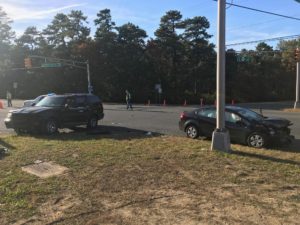 Assisting at the scene were detectives from the Ocean County Sheriff’s Office Crime Scene Investigations (CSI) Unit and the Ocean County Prosecutor’s Office, as well as EMTs from Quality Medical Transport and paramedics from MONOC. Also assisting were members of the Whiting Volunteer Fire Department.

The crash is still under investigation, however, driver error and sun glare appear to be contributing factors in the cause of the crash. It is currently being investigated by Sgt. Antonio Ellis and Ptl. Michael Anderson of the department’s Traffic Safety Unit.

The Manchester Police Department would like to remind all motorists that motor vehicle crashes cause millions of serious injuries each year. Every 10 seconds, someone is treated in an emergency department for a crash-related injury.

The simple act of buckling up is the best way to save lives and reduce injuries from crashes. In a crash, wearing a seat belt reduces your chance of being killed or seriously injured by half.

Most drivers and passengers buckle up when they’re on the road, but one in seven adults say they don’t always use a seat belt. Wear your seat belt on every trip, no matter how short, and encourage everyone else in the car to buckle up too. Make sure kids are properly buckled into a seat belt, booster seat, or car seat, whichever is appropriate for their age and size.

Remember: every person, every seat, every trip.