On Tuesday, November 28, 2017 at approximately 9:31 p.m., a  2006 Chrysler 300, operated by 37 year old Joshua J. Kenny, of Whiting, NJ, was traveling west on County Route 530 in front of America’s Keswick when the vehicle he was operating ran off the road, striking a street sign and utility pole.  As a result of the collision, the vehicle overturned and came to rest on the westbound shoulder of County Route 530. The vehicle then burst into flames with the operator trapped inside. 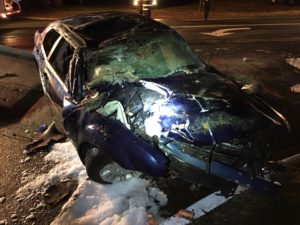 Arriving Manchester Police officers and Whiting Volunteer Firemen were able to temporarily douse the flames with fire extinguishers allowing them to remove the driver, preventing him from sustaining further injury. Mr. Kenny was taken by medical helicopter to Jersey Shore University Medical Center in Neptune, NJ for treatment of his injuries.

The investigation revealed that Mr. Kenny was unrestrained at the time of the crash. He was listed in serious condition upon admittance to the Jersey Shore University Medical Center. As a result of the crash, CR 530 was closed while emergency crews from Jersey Central Power and Light repaired the downed utility pole. 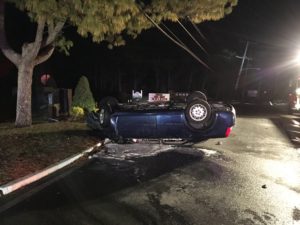 Assisting at the scene were members of the Whiting Fire Police, the Whiting Volunteer Fire Department, Paramedics from MONOC, and Quality Medical Transport. The cause of the crash is under investigation by Sgt. Antonio Ellis of the Manchester Township Police Traffic Safety Section, and Ptl. Brian Collins of the Manchester Police Patrol Bureau.