A driver who apparently confused the accelerator for the brake pedal struck a pedestrian and then a residence on South Chestnut Avenue in the Whiting Section of the Township on Wednesday, October 5, 2016. The driver of the vehicle as well as the pedestrian were not seriously injured in the crash.

Officers from the Manchester Township Police Department responded to South Chestnut Avenue in the Whiting Section of the Township at approximately 7:50 p.m. to investigate a motor vehicle accident involving a vehicle that struck a pedestrian and crashed into a residence. 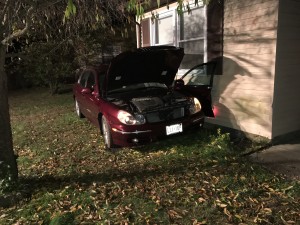 Upon arrival, officers observed a red, 2005, Hyundai Sonata on the grass up against the front of a South Chestnut Avenue residence. Responding officers also observed a male lying on the ground in the street in front of that residence stating that he was struck by the vehicle. The investigation revealed that the Hyundai, which was being driven by 77- year-old, Angela Molina of Whiting was traveling west on South Chestnut Avenue when she came to a stop at the intersection with Falmouth Avenue. After doing so, Ms. Molina attempted to back up slightly in order to read the street signs. It then appears as though she confused the accelerator for the brake pedal and accelerated rapidly in reverse in an eastbound direction on South Chestnut. While backing, the Ms. Molina struck a 61- year-old male, identified as Paul Roth of Whiting, who was walking his two small dogs on the eastbound side of the roadway at the time. After striking Roth, the vehicle continued to run off the roadway, striking an electrical utility box before impacting the front of 61 South Chestnut Avenue.