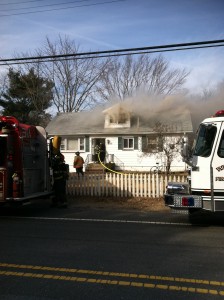 Manchester Police responded to the call of a house on fire on Cherry Street in Whiting today.  At 1:45 pm 911 was called due to a house bellowing smoke from its eves.  When police arrived the sole occupant had evacuated.

Whiting, Ridgeway and Lakehurst Volunteer Fire Companies arrived and began extinguishing the fire inside the house.

Cherry St was closed for approximately two hours from Rte 539 to Diamond Rd while the fire was being handled and investigated.  According to the Ocean County Fire Marshall the cause of the fire is accidental.

Due to the extent of damage to the home, it was deemed un-inhabitable.  The three adult males who were renting the home have been temporarily displaced to a local motel.