A two vehicle crash in the intersection of Route 70 and Colonial Drive this afternoon snarled traffic in the area for approximately one hour. A 72-year-old Whiting resident, Janet Sabba, was injured during a collision between her Dodge Caravan and an Isuzu box truck, operated by 61-year-old Kenneth Parker Jr. of Browns Mills. The box truck is owned by S & K Enterprise. 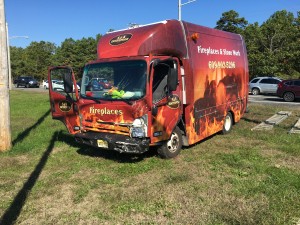 , officers from the Manchester Township Police Department responded to the intersection of Route 70 and Colonial Drive for the report of two vehicle crash in the roadway. Upon arrival, officers observed an occupied silver, 2010, Dodge Grand Caravan in the middle of the intersection with heavy front end damage and an orange and red, 2011, Isuzu NPR box truck also with front end damage on the westbound berm of Route 70. The investigation revealed that the Dodge Caravan was travelling eastbound on Route 70 and was attempting to turn left onto Colonial Drive north when it was struck on the front passenger’s side by the Isuzu box truck. The impact caused the Dodge Caravan to spin 180 degrees through the intersection and stop in a southward facing direction in the middle of the roadway. The impact also caused her vehicle’s air bags to deploy. 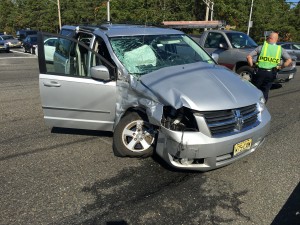 The operator and sole occupant of the vehicle, Janet Sabba, was removed from the vehicle by members of the Manchester Volunteer First Aid Squad and transported to Community Medical Center in Toms River for treatment of possible head and neck injuries. Sabba was wearing her seatbelt at the time of the collision and her current condition is not known. The operator of the Isuzu box truck, Kenneth Parker refused medical treatment at the scene.

Traffic in the area was delayed for approximately 1 hour while police and first responders assisted at the scene. The crash is being investigated by Ptl. Paul Bachovchin of the Department’s Traffic Safety Unit.