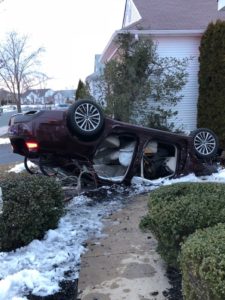 On Friday, March 23, 2018, at approximately 6:31 p.m., officers from the Manchester Township Police Department responded to the area of Verona Drive in the Renaissance retirement community for the report of an overturned vehicle. Initial reports indicated that the driver was still in the vehicle.

The initial investigation revealed that the operator, 89-year-old Joseph Vivo, was attempting to pull into his driveway when he overturned and over-accelerated and struck a tree and a snow bank adjacent to his driveway. The force of the impact caused the vehicle to overturn onto its roof in the driveway. Mr. Vivo was extricated from his vehicle by members of the fire department and after being removed was transported to Community Medical Center for treatment of non-life threatening injuries.

Assisting at the scene were members of both Ridgeway and Manchester Volunteer Fire Departments as well as EMTs from Quality Medical Transport and paramedics from Monoc. The crash is under investigation by Ptl. Steven Wendruff of the department’s Patrol Bureau.