The Manchester Township Police Department is proud to announce that Lt. Vincent Manco was among the 223 law enforcement officers who graduated from the FBI National Academy Program at Quantico, Virginia, last week. The 271st Session of the National Academy consisted of men and women from 48 states, including members of law enforcement agencies from the District of Columbia, 18 international countries, five military organizations, and five federal civilian organizations. 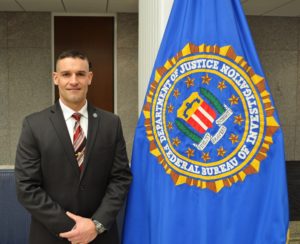 Internationally known for its academic excellence, the National Academy Program, held at the FBI Academy, offers ten weeks of advanced communication, leadership, and fitness training for selected officers having proven records as professionals within their agencies. On average, these officers have 21 years of law enforcement experience and usually return to their agencies to serve in executive-level positions.

FBI Director Christopher Asher Wray was the principal speaker at the ceremony. Training for the program is provided by the FBI Academy instructional staff, Special Agents, and other staff members holding advanced degrees, many of whom are recognized internationally in their fields of expertise.

Lt. Manco is among the 24 law enforcement executives from the State of New Jersey selected to attend the National Academy Program in 2018. He is the first member of the Manchester Township Police Department to attend and graduate from this prestigious training. Lt. Manco’s distinguished career in Manchester Township began in 1999 as a Patrolman. He was promoted to Sergeant in 2008, and earned his current rank, which involves supervising the department’s Investigations Bureau, in 2012. During his tenure in Manchester Township, Lt. Manco received more than 20 Departmental Awards, including the Medal of Honor, the Department’s highest distinction. 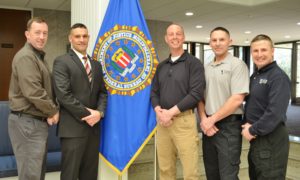 Since 1972, National Academy students have been able to earn undergraduate and graduate credits from the University of Virginia due to the accreditation by the university of the many courses offered. The graduating officers were represented by the class spokesperson, Ralph Cilento, New York Police Department, New York, New York. A total of 50, 808 graduates now represent the alumni of the FBI National Academy since it began in 1935.