On Wednesday, October 18, 2017, at approximately 07:20 a.m., officers from the Manchester Township Police Department responded to the area of mile marker 42.5 along Route 70, in the Whiting section of the township, to investigate a motor vehicle accident involving an overturned vehicle.

Upon arrival, officers observed a black, Chevrolet Cobalt overturned on its passenger side in the woods with its driver trapped inside. The driver of the Cobalt, 64-year-old Kevin Jennings of Whiting, needed to be extricated from the vehicle which was done by members of the fire department. 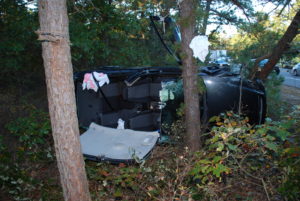 The initial investigation revealed that the Cobalt was traveling east on Route 70 when the driver suffered what was believed to be a medical emergency. This caused the vehicle to run off of the roadway and collide with a tree.  The vehicle was then redirected and overturned onto its passenger side before getting pinned against another tree.  Once Jennings was removed from the vehicle, he was airlifted by medevac helicopter to Jersey Shore University Medical Center in Neptune for the treatment and evaluation of non-life threatening injuries.

The roadway was partially closed for several hours while emergency workers removed the driver from the vehicle, conducted the investigation and cleared the scene.

Assisting at the scene were members of the Whiting and Lakehurst Volunteer Fire Departments, EMT’s from Quality Medical Transport, and paramedics from MONOC.  This crash is being investigated by Ian Bole of the department’s Traffic Safety Unit.